When I show the Social Network movie, I was intrigued by the way that Facebook came out of nothing and gradually evolved to the most successful social media site today. It launched on 2004 and reached the first million active users by the end of the same year. After 2004, it really went sky high, reaching 500 million active users, in less than 6 years! Naturally, I was amazed and asked myself the obvious question: how far this could go on without stopping. Will it reach 1 billion users and when?

To make this forecast, I used the Forecasting Tool application. I punched in the active users data starting from the end of 2004 up to July of 2010 (the latest data from Facebook timeline), and pressed the SOLVE button.

The result came back in a few seconds: 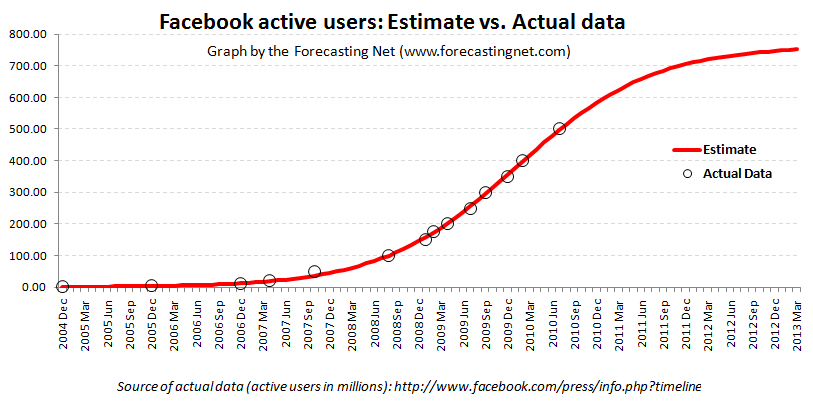 Facebook, according to the forecast, has already exceeded 600 million users, by the beginning of 2011 (It will be interesting to wait for the first official 2011 data from Facebook to verify this!). It will continue to grow-but at decelerating rates-reaching its maximum value near 750 million users by the end of 2012. So, if the current trend continuous, and no significant new decisions or policies emerge from Facebook’s headquarters to further enhance user acquisition, then Facebook will not reach 1 billion but near 750 million instead. Even so, an extraordinary achievement!

Reply forecastingtool
7:41 PM on April 24, 2011
The forecast presented here is based on the official Facebook timeline (http://www.facebook.com/press/info.php?timeline). Since the last available figure is more than half a year old (500+ million on July 2010), I searched the web to find some evidence about the evolution of Facebook's size today and compare it to the estimates presented here.

According to the forecast (http://www.forecastingnet.com/downloads.htm), Facebook already reached 600 million users by Jan 2011, it is currently (April 2011) near 640 million, and will reach 700 million users by Nov 2011. Let's now compare these projections with the additional info I gathered from various web sources.

Goldman Sachs, in a document presented to potential investors on Jan 2011 (http://www.msnbc.msn.com/id/40929239/ns/technology_and_science-t
ech_and_gadgets/), stated that Facebook has already more than 600 million active users. Furthermore, in an article just released by The Next Web (http://thenextweb.com/facebook/2011/04/23/the-numbers-growth-and
-evolution-of-the-behemoth-that-is-facebook/) it is mentioned that Facebook will register its 700 millionth member in the coming months.

Although these are neither exact nor official Facebook figures they do verify that our estimates are pointing to the "right direction" i.e. that FB users already reached 600 million early in 2011 and will reach 700 million by the end of the same year. It will be interesting to wait for the first official figures for 2011 and see exactly how accurate our estimates will prove to be after all.

Reply Elias Shams
6:19 AM on April 25, 2011
It?s no brainer to see that social media is here to stay for good. Given vast variety of the existing channels to choose and stick with, it?s time for such a hot space to enter into a new category. There is a need for a portal to provide a quick and intelligent decision for both the consumer and the enterprise about their online connections.

A Platform to Help us to Distinguish Our Quality vs. Quantity Friends, Fans, Followers, and Companies

Facebook, Twitter, LinkedIn, Youtube, Flickr and others have been doing a decent job of providing additional marketing exposure and even in some cases, additional revenue. However, as more and more social networking sites pop up, how do you manage your brand across all these channels? Maybe more importantly, which one of these sites should you select as the one that will help you best reach your target audience? The proliferation of the social media avenues is becoming overwhelming.

This glut of information reminds me of the early 90?s when WWW was adopted broadly by the general public. Every company rushed to have a presence, to the point it became literally impossible to find the right information on the Web. That?s when a better generation of search engines ? at first the Yahoo! and then Google ? entered the market and helped us find the most relevant information by just typing simple keywords in their search box. If you had asked before Google launched, if there was a need for another search engine ? most would have said no, we already have those?.

Then came Web 1.0 & 2.0 ? Youtube, Flickr, myspace, Facebook, Twitter and countless others have turned everyday people into content producers, influencers and experts. We basically tripled down on the information overload How do you know which channels to select for deploying your social media strategy? How do you know which one is the right channel to let your fans and followers to find you, your products, and services? Most importantly, who is Joe Smith that is recommending that person, that company, that product?

I hope my awesomize.me can accomplish such a mission. The site is not another social networking platform. Yet the portal to all your existing social media channels. The platform helps you, your fans, your potential clients to make an intelligent decision as to which company to connect to or follow via which social media channels and why? It?s free!

Reply forecastingtool
8:24 PM on April 25, 2011
Hi Elias, I checked the site, looks interesting. What is the methodology or the underlying rational behind the selection of the appropriate social media / companies to follow? I hope I am not touching any confidential areas here, but I think this is interesting to share with other members.

Reply Elias Shams
1:09 AM on April 26, 2011
George, the social media channels are all entered by you (the user or the company). They just simply enter all the channels they are member of. i.e. check out mine on top of my page:

Other users then decide where to follow me and why based on what they have learned about me and my rating from others.

As a practical example, assuming I'd like to follow you online. But, not sure whether you are a linkedIn person or FB or Twitter or what. It would be nice I see a page of you similar to mine to get a quick intelligence about you and then select the right social media channel of you to connect.

Let me know if you still have a question.

Reply forecastingtool
4:59 PM on April 26, 2011
OK, got it! Thanks Elias. Perhaps, it would be nice to have a premium account adding some automation to the system. For instance, to gather info about users from the internet / social media and automatically build a popularity index.